As part of the 2012 Art in the Eastside Billboard project, several sites were dedicated to reflect community interest.  This was delivered in several ways; by highlighting local community groups artistic work, by responding artistically to social issues and by an artistic response to the history of East Belfast.  The following images depict the approaches various artists have used to execute these community interest billboards and posters

GEORGE ROBB – MACARA – This is a selection of images from a mosaic wall piece, created by 2 women’s groups in East Belfast from the Ballymacarret and Short Strand areas. It is full of symbolism, colour and craftsmanship, with the icons being ones that are recognised by all.  The word ‘Friendship’ features , depicting that the women formed a definite bond whilst working together and the word ’MACARA’ which is an amalgamation of both groups names, demonstrating their unity and the name they use for their group 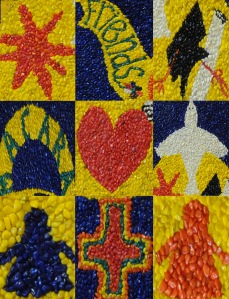 DEIRDRE ROBB – Respect Everyone’s Journey With kind permission from the Department of the Environment, the artist was inspired and influenced by their current 2012 advertising campaign, which highlights the need for everyone to respect each other’s journey and to practice due consideration when using the public highway. Using a local resident as the model for her work, staging the photograph along  Bloomfield Avenue, a popular shopping area of  East Belfast and through artistic interpretation, Robb  uses strong diagonals and colours, leading the eye to the main message – Respect Everyone’s Journey – which can be interpretated literally or as a metaphor for life. The text and colour of the image is deliberately reminiscent of sci-fi films and is intended to encourage you to think of  ‘the extraordinary’ and consider what ‘other dimensions’ are there or could be.

LESLEY CHERRY -Carew Family Centre This work is a collage of paintings and mosaics created by a group of older women, based at Carew Family Centre, in East Belfast.  Over a period of 6 months, Cherry worked with the women, building skills in mosaic, photography, collage and painting.  This work highlights the artistic talent and creativity of the women, the majority of whom had never engaged in any artistic  practises before.

BRADLEY QUINN – Sea of Yardmen This work was inspired by an iconic photograph of yard men taken over a century ago. The original photograph portrayed the life and times of the shipyard workers who built many great ships including the Titanic, The Canberra,and HMS Belfast.  Quinn  brings the spirit of the original to life during the 2012 Titanic Centenary year and celebrates East Belfast’s proud ship building heritage, with this digital photo-montage work. The image consists of ex- shipyard workers, families with connections to the shipyard and others, all dressed as shipyard workers, captured in a modern setting, in front of the new Titanic Belfast building. 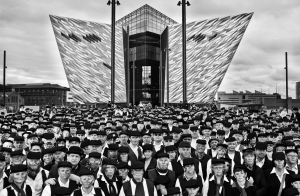 DEIRDRE ROBB – Stormont  – Robb used drawing as the medium for this work, exploring the many iconic landmarks in East Belfast. She created a series of work that explored the shipyard, famous people and buildings with a historical significance to the east of the city. The Stormont Building was selected by the panel and represents the political past, present and future of the area and of Northern Ireland, where all parties, no matter what their view, sit as part of the democratic process. The striking yellow tone used in the background represents the industrial heritage of East Belfast, as well as being a metaphor for positive and forward thinking decision making, in this monumental and important institution. 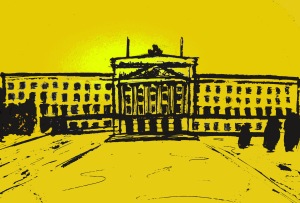 COLIN DAVIS – Titanic No other ship or vessel that originated from Belfast Harbour can convey the strong feelings and emotions that are felt about the TITANIC. Particularly within East Belfast as many of the descendants of the workers who built the infamous ocean liner still feel a great sense of loss and pride at the same time. In making this work, Davis captures these  mixed emotions which have in themselves informed and constructed the tenacity of the character of  Eastside inhabitants, which also helped them through difficult economic times and the darkest days of the Troubles. 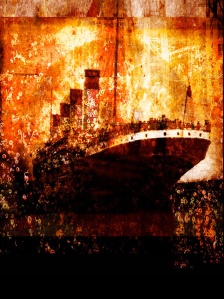